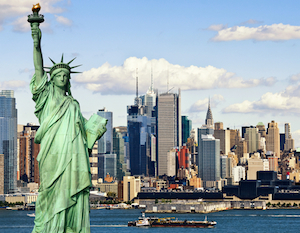 What is one of the first images that comes to your mind when you think of Manhattan? One image might be the statute of liberty. She stands proud on Ellis Island, serving as a reminder that Manhattan was a floodgate for European immigrants from the early 19th century until the middle 20 th century. Over 100 Americans today can trace their ancestry to the immigrants who first arrived in America through Ellis Island.

It is important to note that the numbers listed above are merely complaints, not convictions, where the accused pleads or is found guilty. For example, the actual felony rate of convictions in Manhattan for 2012 is only 69%. (See NY Times, 8/30/13.) How can you be apart of the 31% who does not receive a conviction? You need an attorney from Lavy Law knows how to get your case dismissed or win you a not guilty verdict due to its experience as a prosecutor, court attorney, counselor and trial attorney.

Lavy Law has experience in all of the major categories of crimes committed in Manhattan due to its background working as a prosecutor in five counties including: San Francisco, Contra Costa, Marin, Stanislaus and Santa Clara. The crimes that we defend clients against include:

Additionally, Lavy Law can help you even if you already lost in criminal court and have a conviction. This service is known as Appeals. Lavy Law will ask a higher court with greater authority to review the decision by the lower court and point out how the judge incorrectly applied the law, the procedural issue, or incompetence by your prior attorney.